By Richard Vine
Open a larger version of the following image in a popup: 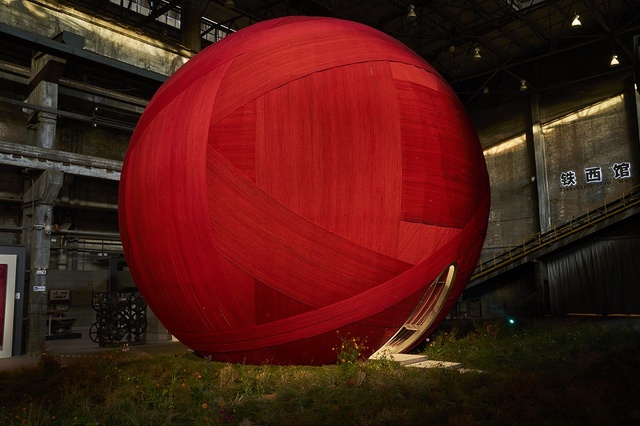 When you start on your journey to Ithaca,

then pray that the road is long,

full of adventure, full of knowledge.

Even before one entered Ai Jing's fall 2018 exhibition in Shenyang, China, its dreamlike, virtually archetypal character was evident—both in the circumstances of its creation and in its title. The artist—then in her nineteenth year of fine art practice—had already studied with Zhang Xiaogang, a leading figure in global contemporary art, and had shown at the blue-chip Marlborough Gallery in New York and at major public institutions like the Veneranda Biblioteca Ambrosiana, Milan, and the National Museum of China, Beijing. The new show, however, was sited—somewhat unusually—in the China Industrial Museum, an enormous former factory building featuring a football-field-sized "gallery" space with clerestory windows and overhead crane tracks, surrounded by heavy machinery from the industrial past. To this soaring, elongated hall, still faintly redolent of oil, Ai Jing brought the paintings, fabric works, and large-scale installations that constituted "My Mom and My Hometown."

This title was triply significant. First, few mythic themes are more universal or powerful than the return home, the psychological dynamic behind several classic cultural expressions. In the Odyssey of Homer, the ancient Greek chieftain Odysseus, who has fought for ten years on the plains of Troy for the return of the abducted Helen, sails adventurously for another decade on the “wine-dark sea” to reach his native island, Ithaca, and the wife and son who await him there. The biblical parable of the Prodigal Son tells of an errant youth who, having left home and wasted his inheritance, is nevertheless welcomed back with merriment and feasting by his all-forgiving father. Such timeless stories suggest a paradoxical constant in the human condition: for the sake of both personal and communal well-being, individuals must at some point separate themselves from family and social group and, at another point, must voluntarily reintegrate into the community. Happiness, singular and collective, depends on that push-pull initiation. For some, it is a simple rite of adolescence (involving haughty impatience with parents and their peers); for others—those who depart farther and change more drastically—it is a key work of adulthood, a marker of maturity.

Ai Jing's departure from Shenyang was the very contrary of the Prodigal Son's grim sojourn. Having had private voice lessons and attended the Shenyang Special School of Art, the young performer left the city at age seventeen, not to waste her resources in self-indulgence but to further develop her talent. In Beijing, she studied at the Central Academy of Drama and became a member of the Oriental Song and Dance Troupe. Creating an independent style, she soon found success in international culture capitals like Beijing, Tokyo, Hong Kong, London, and New York—first as a singer and actress, then as a visual artist.

Yet in the midst of the glamorous worlds of music, fashion, and art, Ai Jing felt a persistent nostalgia, a longing to reconnect with family members and the working-class values of her native city in Liaoning Province. She had not rejected these early influences—her factory-worker father played a half dozen traditional instruments and her worker-mother sang northern-style Ping opera—but she updated and globalized them in her own distinctive way. Her music, much of which she composed herself, incorporated both Chinese and Western elements into a haunting blend of folk, rock, and pop. Her visual art, which often involves color fields and seriality, owes a not-so-secret debt to her mother's incessant needlework and knitting. Such influences ground the artist in a manner that is rare in the cosmopolitan realm of contemporary art. Ai Jing has often said that she would like to produce art for blue-collar audiences—an unusual sentiment in a cultural milieu now obsessed with celebrity and money.

Thus "hometown," in its mythic aspects, is a place in the mind—the seat of origin and return, evoking the fundamental cycle of life. But it is also, in the second sense of Ai Jing's title, a very specific city with a particular history. Shenyang, set in an oil-rich region known for its hot summers and cold winters, is the largest metropolis in northeast China. Locate less than four hundred kilometers (half an hour's flight) from North Korea, it has a history that is both troubled and rich. After the Manchu invasion in the seventeenth century, it served as the capital of the nascent Qing Dynasty until the capture of Beijing. Three centuries later, Shenyang was a major urban center in the state of Manchuria, created under Japanese occupation. After WWII, the city was a Chinese Nationalist stronghold until seized in a sweeping 1948 Communist victory.

The Shenyang of Ai Jing's youth in the 1970s and early '80s was model of centrally planned industrialism. Tool-making and heavy manufacture dominated the economy. Workers experienced both the demands and the benefits of the era's "iron rice bowl" policy: long hours of labor in their "work unit," offset by the security of communal housing and schools, guaranteed employment, free medical care, and a dependable pension. Ai Jing's father worked in the Shenyang No. 1 Machine Tool Factory; after twenty years, his shoulder was permanently slanted from turning the wheel of his tool-making equipment—but his wife and three daughters were adequately provided for. This life of mixed blessing was disrupted by China's post-Mao economic reforms and the regional decline of heavy industry in the 1990s, which prompted factory closings and staggering unemployment. Yet, today, Shenyang has recovered through a massive infusion of new businesses, especially in the automotive, software, and electronics sectors.

In one sense then, the installation of "My Mom and My Hometown" in a former factory space was emblematic of the area's (indeed, the country's) ongoing shift away from mass production and toward creativity—whether in the fields of commercial design, artificial intelligence, and high-tech manufacture or in the domains of the visual and performing arts. During the exhibition, this intricate economic-aesthetic link was examined by scholars from China, Europe, Japan, and the United States, who participated in the daylong symposium "The Twentieth Century's Industrial Civilization and Contemporary Art" at the Lu Xun Academy of Fine Art. The fourteen works Ai Jing brought to the Industrial Museum, it became clear, often fondly referenced the hard-working past, but they also betokened a transformative future.

Among the most striking examples was Mother's Fragrance (2018), a ribbed balloon-like tent structure nine meters in diameter, Resembling a giant cherry-red ball of yarn, it loomed in the middle of a field of weeds and wildflowers reminiscent of the grasslands that stretched away from the artist's girlhood door. In the womb-like interior (where a phallic-shaped doorway pointed upward to a vaginal oculus) a scent once worn by her mother was occasionally dispensed. Nearby was a self-portrait figure of a girl on a high swing, and below her an old boiler showing video snippets of daily life in Shenyang. The three panels of The Strings (2018), looking like vaguely Rothko-esque paintings, were actually composed of yarn tautly stung on nails and playable like the strings of an instrument.

In addition to exploring sociological and psychological issues, the artist also revealed her spiritual concerns through such works as Ai Pray (2018), a much-enlarged steel cast of her own hands in a fingertip-touching alignment that, although it duplicates Gothic and Renaissance depictions of Christian prayer, Ai Jing initially learned during a period of Buddhist study and meditation. The highly textured, flowery, bright yellow oil painting Walking in the Sun #3 (2015)—in keeping with several religious traditions in the West—associated Nature and vivid colors with light, light with God, and God with love.

But the central work of the exhibition, conceptually as well as physically, was the titular My Mom and My Hometown (2012). It is composed of a full-size, extremely lifelike figure of the artist's mother seated on a chair in the act of knitting a huge tapestry of countless rectangles, each containing the word "love." Spread on the grass like a piece of 1960s scatter art, the tapestry evoked the patient craftsmanship—what the art world would call "process"—that Ai Jing has come to esteem and to practice. (There is an echo, too, of Homer's Penelope, who—fending off multiple suitors—wove and rewove a burial shroud while awaiting her husband, Odysseus.) In a silent, kindly counterpoint to Confucian paternalism as well as to the chauvinistic Western tradition that stems from the Patriarchs of the Old Testament, this dedicated "Mom" embodies the third implication of the show's title: maternal love.

Here the reciprocal nature of true devotion is made manifest. Ai Jing, an adept writer who has published numerous articles and books, has confessed in print that she long resented the knitting that her mother insistently did for her. The results burdened the independent, globe-trotting young woman with unfashionable apparel, designed and sized for the simpler girl she was when she left home. Fortunately, this classic mother-daughter conflict was resolved several years before her mother's 2015 death. Indeed, Ai Jing grew to cherish this protective gesture so much that she commissioned her mother and some fifty relatives, neighbors, and friends to create the "love" tapestry from repurposed old clothes, thus recycling their provincial, homebound handiwork into a sophisticated artwork that at once acknowledges and transcends its origins—much like Ai Jing's hometown exhibition and the artist herself.