My Mom and My Hometown: 2018 Solo Exhibition at the Industrial Museum of China (Shenyang) 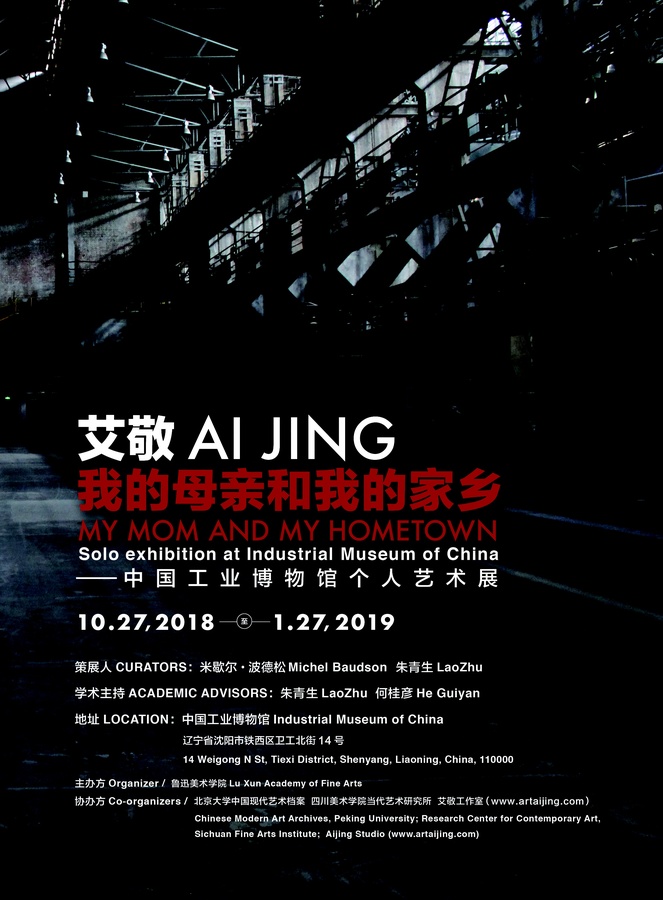 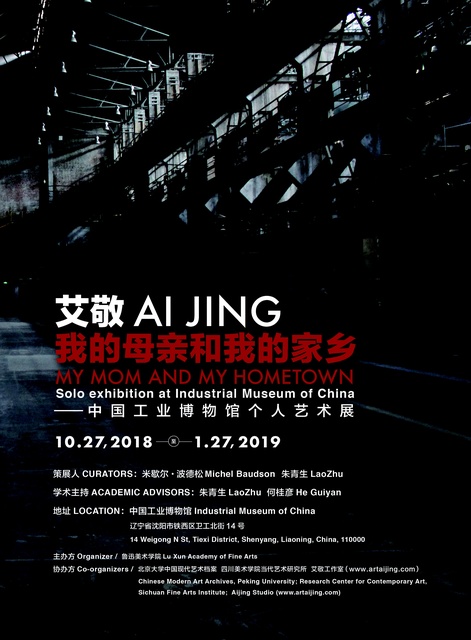 “My Mother and My Hometown”

-Ai Jing’s solo exhibition at the Industrial Museum of China

Ai Jing, a native of Shenyang, left her hometown at the age of 17. In the same year, she rose to fame with the song "Shenyang, my hometown", and soon thereafter, she released an original album "My 1997" which shook the music world throughout Asia. Having toured and traveled for more than a decade, Ai Jing shifted her creativity from being a singer-songwriter to the visual arts and has held various art exhibitions at art museums and galleries in China and overseas. On October 27, 2018, Ai Jing will return to her hometown and hold the solo exhibition, “My Mother and My Hometown”, at the Industrial Museum of China, on Weigong street in Tiexi district of Shenyang.

In an old and dilapidated foundry plant, Ai Jing will present her most recent works of art.

This exhibition is organized by the Lu Xun Academy of Fine Arts, co-organized by the China Modern Art Archives of Peking University and the Institute of Contemporary Art of Sichuan Academy of Fine Arts. The exhibition will feature more than a dozen of Ai Jing's most recent works, including the sculpture “Embrace No.1”, “Embrace No.2”, “Girl and Swing” and a 9-meter-diameter large-scale installation, “Mother's Scent”, which marks Ai Jing’s first artwork about fragrance, inspired by the scent of her mother’s hair ointment. This fragrance was refined by a French aroma master and will be placed inside the installation to be released periodically. There will also be three series of works on canvas, "I Love Color," "The Strings," "My Mom." In the venue, Ai Jing will transplant a large area of the grassland to restore the partial appearance of the grassland, close to the artist’s former childhood neighborhood. With an intention to encapsulate the joy of her childhood in the factory, Ai Jing frames what she has seen and felt, for instance, the expressions and atmospheres of the youthful aunts and uncles who worked in the factory. The exhibition will present a surreal impression, where the girl in the sculpture of "Girl and Swing" will be swinging on the grass at the venue. This "absurd" scene embodies the artist's romantic feelings, both reminiscent of the wonderful sceneries at the factory and an awakening and activation of one’s inner self.

Three years ago, Ai Jing’s mother passed away at the age of 65. Her mother’s departure brought a tremendous amount of grief on Ai Jing and her family. Ai Jing began to think about her life journey – about life and death, where do we come from? At the same time, she also reflected on why she had to leave home to pursue her dreams. Perhaps her dream was under the poplar tree at the doorstep... People often said that they would return home, return to their hometown, for Ai Jing, as much as she wishes to express her filial piety, her loved ones are no longer there… Ai Jing wants to return home and express profound affections for her loved ones and her hometown, as a way of paying homage to her mother and to her hometown.

As a child of the working class, Ai Jing’s widely circulated music such as, "The Story of Yanfen Street" and "A Woman like Grandma", depicted the dreams and feelings of the workers' children. Today, Ai Jing chose to host this exhibition in the industrial workshop of Tiexi District where she lived in her childhood. She hopes that through her own creation and practice, she will bring renewal to the place and invent new values through transforming old objects, and with which, to sing the praises to the spirit of craftsmanship. No matter how the times change, our beliefs and determinations stay firm. One’s spirit determines one’s creativity. This is the integrity at an industrial base - the role of the "big brother" in Shenyang. In participating in the seminar organized by the Chinese and Western curators Michel Baudson and Mr. Zhu Qingsheng, the academic presenter Mr. He Guiyan and other overseas art historian and critic—“Industrial Civilization and Contemporary Art”, Ai Jing hopes to chronicle the relationship and mutual influences between China's modern and contemporary industry with contemporary art, that will provide certain conclusions and subjects of discussion for Shenyang.

Ai Jing translates the nostalgia for her mother into strength and her personal emotions and experience into a context in which she could communicate with the public. This is what Ai Jing has been working on consistently – to envision the bigger picture through details, and to achieve greatness from the insignificant. The source for artistic practice is often drawn life – from the folk, the everyday, the reflections on human nature, the exploration of the unknown, and the desire for freedom, that inspires and opens up for a variety of possibilities. Art should serve the people. It should convince people of the power of creativity and love, so they believe in the beauty of life that demands our collective effort to achieve.

There is also an indispensable component of this exhibition, music. "My mother and my hometown" – the Opening Concert of Ai Jing’s Solo Exhibition at the Industrial Museum of China is undergoing intense preparation. On this occasion, Ai Jing will invite the acclaimed musician Sanbao to direct the Liaoning Symphony Orchestra, in presenting the symphonic concert with the theme of “Mother and Hometown”. Musician and rock singer, Luan Shu will sing "Song of Straw Hat", jazz pianist Kong Hongwei will play the piano piece "Blue" composed by Ai Jing's sister Ai Dan, and the tenor singer Zhang Xiqiu will sing "That is me", and Ai Jing will also sing her masterpiece "A Woman Like Grandma" and the "Shenyang, My Hometown", a song that has bee popularly circulated throughout China. For the concert, Ai Jing will also invite the Youth Choir of the Liaoning Symphony Orchestra to participate in the performance. The entire concert will be run by two carefully planned video clips, and the famous host Liu Fangfei will recite a classic poetry to set off the atmosphere of this thematic concert. The opening concert was jointly planned by Shenyang Radio, TV Station and Ai Jing Studio, and will be broadcasted live on Shenyang Radio and Television.

Ai Jing, a woman of Manchu origin, was once considered as a "son" in her mother's eyes, who was the eldest son in her mother’s mind. Similarly, the former industrial base in Shenyang was once called the "eldest son of the Republic", who has had a tremendous amount of responsibilities. Time will not wear off people's will, although the road to return home has taken a long time, and its path has been tumultuous, Ai Jing has nevertheless returned to her hometown with firm convictions and a sense of mission. Ai Jing, who has been wandering for many years, has finally realized that Shenyang is her world.

It is on this occasion, we would like to express our sincere gratitude for your constant belief and support in the artist. And we invite you to attend Ai Jing’s solo art exhibition - "My mother and my hometown".